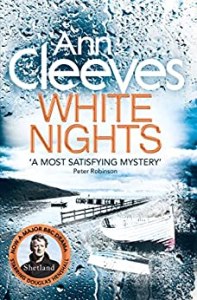 During an art event in the small community of Biddista, Shetland cop Jimmy Perez encounters an Englishman who appears to have lost his memory. When the man is later found dead in a fisherman’s hut, it looks like suicide, but further examination reveals he’s been murdered. Forced to bring in experts and another detective from the mainland, Perez struggles to discover the dead man’s identity. But when another body turns up, the investigation starts to look like a conspiracy.

Set against the backdrop of midsummer on Shetland, this is book two in the series and like the first one, Perez has DCI Roy Taylor to contend with, as well his flourishing relationship with artist, Fran. Ms Cleeves has a talent for describing landscape and wildlife, as well as the petty squabbles and insecurities that flourish in such tightknit communities. The gradually unravelling mystery is beautifully done, and while the denouement isn’t quite as satisfying as in the first book, the author’s intelligent use of language and her cast of deftly-drawn characters, is more than enough to make this a thoroughly absorbing and gripping read.

Will the Real Sherlock Holmes Please Stand Up?