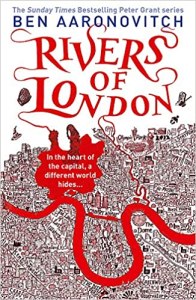 Probationary cop Peter Grant longs for an interesting transfer in the Metropolitan Police Service, but after a strange encounter with Nicholas Wallpenny (who happens to be a ghost), what he gets is something unexpected. Learning that his new inspector is also a bit of a wizard, Grant finds himself talking to dead people, casting spells and tracking down a villain who can blow your face off.

One of the things I loved about this book is the author’s apparently comprehensive knowledge of London, not least including the fascinating history if its rivers. The details of the city’s lesser-known streets, theatres and historical figures are seamlessly interlaced with its vampires, apparitions and gods and goddesses. Aaronovitch’s humour had me cackling, too, and I liked his wit (though it does have a particularly British flavour).

My only gripe is that the main character comes over as a bit limp and doesn’t seem as clever as he should be (given what he’s dealing with). He also has a rather sexist view of women which, in my opinion, leaves him a bit lacking in the hero stakes.

A clever and witty book that takes policing London to a new level.

4 comments for “‘Rivers of London’ by Ben Aaronovitch”