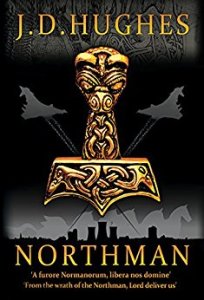 Twelve hundred years in the past, Vikings raid an Anglo-Saxon village, beginning a sinister series of events. When archaeologists Kate and Doctor Weatherall uncover an ancient but puzzling burial site, strange things start to happen. By the time she meets film director Michael, Kate is already the target of an outlandish and terrifying force.

Running to more than 500 pages, this is a hefty book. Now, in my experience, hefty books need to be damn good to hold my attention if I’m going to keep going right to the end. But there was no need to worry – this is one of the best books I’ve read in years. The sheer audacity of JD Hughes is a delight to behold – he doesn’t just tell a story, he tells an epic story and he does it with confidence and style and a keen intelligence. Hughes claims to have sought advice from other quarters to give credence and authenticity to some passages, but I reckon the man is being modest.

It’s not often I come across a talent like this, where the writing and imagination come together so beautifully in character, narrative and language. Mr Hughes has created a thrilling and completely enthralling read that promises much and goes on to deliver – in spades. If you read nothing else this year, read ‘Northman’.

2 comments for “‘Northman’ by JD Hughes”